Here is how he answered our questions.

1.How does an idea for a story come to you?

Two years back, when I met Priyanka Dey at Delhi, we hit upon an idea while talking about different issues. This was when we decided that we should together work upon it. In the first few rounds of discussion, she accompanied me. But later, she gave the whole plot to me, because she was much occupied with other things, for which I still owe it to her. And there were times when I met a blind end in the story and could not make further progress. This was when my friend Vikram came to the rescue. While finishing my book, I was in a constant contact with both of them, so this book is a work of joint efforts by friends together.

2.At what age did you start writing?

I started writing when I was in college, though at that age, I used to spend very less time on it and have now turned into a full time writer.

3.Is this your first book?

No, I have already written four books and my first book titled My Love Never Faked was a bestseller. This book was based on my true life incidents and I am very close to it. It largely put me into mainstream writing, which I never thought I would do.

4.What is the story in ‘WHITE SMOKE’ about?

Virat studies in a renowned boarding school in Shimla. But behind the façade of a happy teenager is a disturbed child trying to fight the pain of his mother’s death and his father’s ignorance. That’s when he finds a picture in a library book, which changes in trying to find the truth behind the girl in the picture, he stumbles upon dirty secrets and a scandal that shocks him.

This is how the story builds and takes you to Delhi, where a CID officer and Police Inspector Mathur are trying to unravel the mystery behind the gruesome murders of two influential families that seem to be connected to the mysterious girl in the picture.

The story is about how Virat digs the truth out – behind the murders as well as the mysterious girl.

5.Why did you name your book ‘WHITE SMOKE’?

Ever since I began writing this book, I had a long title in my mind. But when I was about to complete it and got in touch with Arup Bose of Srishti Publishers, he suggested that I keep the title short and crisp.

White in the title signifies wholesome and smoke is for the mystery, being indiscernible yet being there. This refers to something beyond human imagination and once you start reading the book, you will come to know that the title works well with the story.

6.Which is your favorite character from this book?

Inspector Mathur. The story revolves around him. While I was working on the book, I was so infatuated with this character that I started elaborating more – how Mathur should react to the different circumstances in the story and how he’d be thinking. The way he moves step by step to solve the case gives goose bumps. Sometimes I feel that I gave my whole attention to this character, being a little biased towards it, but once you read the book, you will fall for Inspector Mathur’s character who steals the show in the end.

7.What do you think is more important- the words used or the feelings?

As a writer, it is hard to say or write even a single word without feeling it and if written superficially, it won’t express the right feelings. A word written with just the intention of being showy may look great to read, but will not connect with your reader. It will read dry, like decorating a book but not actually making it a good book.

8.If a favorite character of your favorite book comes alive in front of you, what would you say?

As most of my readers know that my first book is very close to my heart, more so because I have actually lived that book in real, the female protagonist of that book is still my favorite. That character may not be in contact with me or with me now, but still those moments lived together are very fresh in my mind. With gratitude, I always owe this success to her, and that’s why I never forget to acknowledge her in all my books.

9.Is there a particular time of the day when you write your ideas? When?

I always feel ideas are like extraterrorital electromagnetic flux which keep showering upon us like meteors. So whenever I hit upon an idea, I try to make a note and put it into execution to find out its prospective. If it suit me and appeals to me for being a part of the story or a plot, I try to do more research to make it look as close to reality as possible.

10.What do you consider to be your biggest accomplishment?

From nowhere to a published writer is the biggest achievement I feel that I am blessed with. I come from a state where basic education is a priority and we don’t have a large established literary industry. So to get a start from the capital without knowing people there and with no connections was a huge success. This could never have been possible without Jayanta Kumar Bose from Srishti Publishers, who believed in me and my work. He was the one who trusted me for the first book and encouraged me to write more books. He is my mentor and for many other bestseller writers too. He is the one who always believed in budding writers and always accepted them with open arms.

11.They say, “Nobody can judge you, as much as you yourself can.” Where do you see yourself 10 years from now?

I believe in simple living and want to shed all my burdens which I think I have came up with all these years. So in the next ten years, I would like to be a calmer version of me. But before doing anything like this, I would like to write something for the society which will be more purposeful than writing a commercial fiction. I want to write and make an impact to the society against its evils.

12.What would you be doing if you weren’t into writing?

If I was not into writing, I would have been doing more in my field of physiotherapy. It’s not like I am not into full time physiotherapy, but I have always been more passionate about writing.

13.How do you react to the reviews that you get about your writing from your readers?

The reviews do real justice to your work and their credibility also adds to you. They actually reflect your true wealth – because feedback makes us do better each time. Also, people around you may not tell you the actual thing, more so critically, but reviewers are always there to show you a mirror. A good reviewer not only criticizes your work, but also gives space and suggestions for improvement.

14.List any 3 books that you would recommend to our readers. Three books

CLUB DEAD by CHARLAINE HARRIS, THE HONEY TRAP by THEA WOLF and nowadays I am inspired by and reading more by DEVDUTT PATTANAIK. I have collected his whole set of books and would like to recommend these books to my readers too.

15.Is there one specific subject you would never write about? What would that be?

Every since I have found a writer in me, I have tried to explore each and every genre – from writing a love story to witty content. And with invariable change with the genre now, I am up with a thriller. I do not want to be tagged as a writer of a specific genre, and want to explore. There is no precise subject I do not crave to write about.

It would be women empowerment, which is the subject of my next book.

17.Which genre, according to you, is the most difficult to write?

Writing a biography perhaps. There are certain perspectives in it which remain untouched and no matter how much you put efforts in it, somehow it remains biased to the person or the story. Actually, it’s like finding a needle in a hay stack.

18.Are you working on your next? What is it about?

My next book is about women empowerment, and it’s about the journey of every woman who faces every kind of discrimination, both at home and work, and overcomes it bravely. And my story is about three ambitious girls, and how they together overcome the pain and struggle to make a mark for themselves. It adds a moral burden to my shoulders too, because I need to approach each scene and event very responsibly and with a balanced approach.

19.What is your message to other budding poets/writers.

Keep writing, no matter what. Stay focused. Read other writers and understand what they do and how they do it. Never get disheartened, because writing is a very tough job. 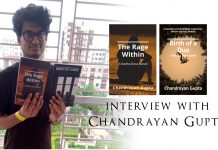 Interview Of Rajeev Pundir, Author Of Even God Does Not Know